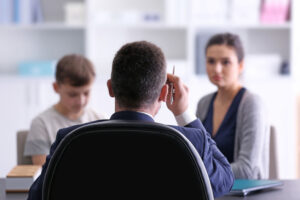 MVP (Most Valuable Parents) of Buffalo just worked with the Buffalo public schools, talking with parents of students who’ve been chronically suspended. If you’re a parent of a student who seems to get suspended often, what can you do about it?

How to Deal With a Suspended Child

If you’re like most parents, when you find out your child got suspended you want to be shocked, angry, confused or embarrassed. While those are seemingly natural feelings, in the case of a suspended student it’s important for you to remain calm. The child is watching you and noticing how you react to the news. Now you might want them to see you’re angry, but you have to remember they’re going to copy you because they are an extension of you! Ideally, it’s better to be calm than angry when reacting to the news a child got suspended. If you need to, take a couple minutes to collect yourself before you confront the child– cool off a little first! Instead of yelling at the kid, you can calmly tell them you’re upset about this news and you want to “discuss it later when I’ve had a little time to digest this bad news.”

After clearing your head, it’s time to get the full story. It can be so easy to react and overreact to bad news but you might not even know the whole deal, right? You might think it’s someone else’s fault that your child got suspended, and that might be true, but you don’t want to jump to conclusions before you know all the facts regarding the situation. Treat the situation as if you’re a reporter and you need to get the facts before you judge what went on… take time to hear what administrators tell you, as well as what your child tells you about the suspension.

You might even want to schedule a meeting with the administrator or teacher involved, so you can hear it from them in-person. When you do talk with the person giving the suspension, ask them for details of the incident and ask to see evidence that supports their conclusion. You can also ask if there are any other alternative punishments available.

Find Out the Root Cause

Though you might be mad at your kid for getting suspended, it’s important to get to the heart of the matter– what was the real reason they behaved in a certain way? Maybe they’ve been bullied (and you had no clue!) or maybe they’re upset over your divorce, or something else.

Give your kid some empathy– showing them you do care how they feel– but also give them consequences, like “no phone for a week” or “no TV for a week.”

Finally, if your child seems to be chronically suspended, chances are they need some emotional, mental or psychological support from someone else in addition to you– so have them talk with a counselor, clergy member, psychologist, etc. Figure out why they’re behaving the way they do and what can be done to change that behavior to one that has more positive outcomes.

In our community, MVP of Buffalo provides support to parents of chronically suspended students. Contact us today for more information.