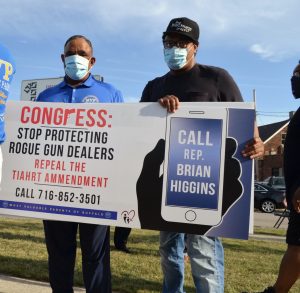 The Tiahrt Amendment prohibits the Bureau of Alcohol, Tobacco, Firearms and Explosives (ATF) from releasing firearm trace data to anyone other than law enforcement agents or prosecutors. It requires the FBI to destroy all approved gun purchaser records within 24hours and limiting ATF from requiring gun dealers to submit inventories to law enforcement.

MVP has been at the helm of the push to have Tiahrt Amendment repelled. We are appalled that not enough people know of its existence and how it affects them. We have made elected officials such as the District Attorney and the Mayor of Buffalo, NY aware of our stand and what we feel about the Amendment.

Brian Higgins has taken our cry for help to the floor of the Senate, however this is not enough, we need YOU to walk with us in this fight so that we can get these laws changed. Will you join us?

For more information and to join MVP in this cause go to www.joinmvp.org

« MVP Feeding the Community during the Pandemic
Its’ a Success! »